Why Support.com Is the Craziest Meme Stock on Earth

Support.com (SPRT) is officially a legendary meme stock and is now on our official list of meme stocks.

I mean, look at this hilarious chart: 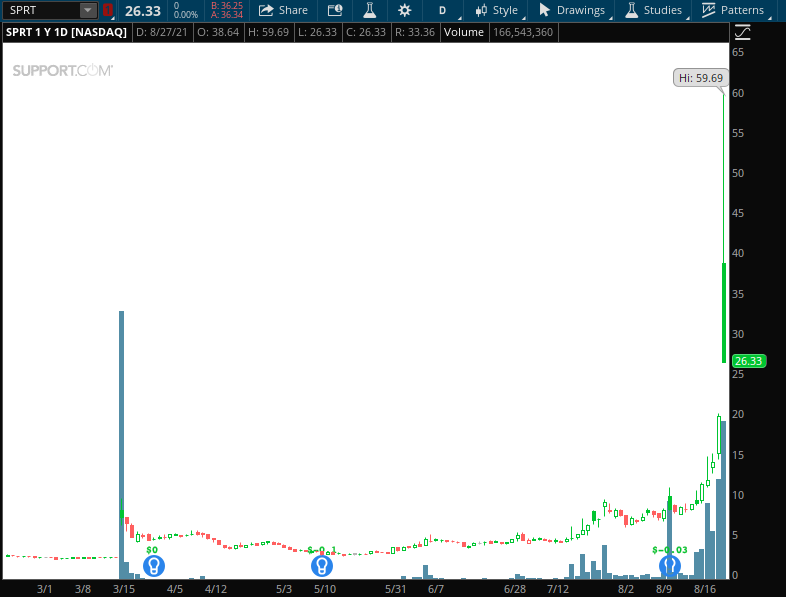 The stock was up 34% Friday and it's indicated up another 40% today.

Support.com describes itself as "a leading provider of customer and tech support solutions and security software with a global network of home-based experts."

So let's look at why Support.com is a downright legendary meme stock.

We're not saying to buy the stock.

We're simply saying this is going to be volatile beyond belief. It could make AMC (AMC) look like Procter & Gamble (PG).

According to Bloomberg, about 60% of Support.com's float is sold short, so what we're seeing is a good old-fashioned hedge-crushing short squeeze.

Interestingly, exactly ZERO Wall Street analysts cover this stock (source: Yahoo! Finance), so it's impossible to figure out where expectations are for this wild name.

The options are also pricing in some outright crazy movement. Be warned: the spreads on the options are a mile wide and it will be hard to get good fills on any trades.

That means it won't take a lot of power to make Support.com double or triple... or get cut in half.

That's right - it turned its entire share base over 7 times on Friday.

So... the meme stock movement is alive and well.

And we believe Support.com will be the craziest meme stock yet.