Welcome to our list of the hottest meme stocks in the #wallstreetbets universe, complete with updated stock quotes.

Click on each name to see more info, and Scroll down to see descriptions of each company and to join our newsletter.

This is not a list of meme stocks to buy or sell. These stocks are like freaking rollercoasters, so be careful. For informational purposes only.

*important: stock prices are delayed. Do not rely on this information for trading and/or investment decisions.

And again, this is not a list of meme stocks to buy or sell. For informational purposes only!

AMC (AMC): The largest and most recognizable global theater company. Focuses on providing the best experience possible by selling concessions as well as having plush reclining seats for all guests. AMC as a brand currently mimics national covid restrictions and meme investors are optimistic on future performance as Covid restrictions are lifted.

GameStop (GME): Specialty retailer that focuses on video games and consoles. The company has begun to try and pivot to compete online, by adding the CEO of Chewy to its Board. Gamestop needs to continue to adapt its outdated business model of selling gaming disks in the new digital era.

Digital World Acquisition Corp. (DWAC): this is a SPAC which merged with Trump Media, the media operation of former US President Donald Trump. Need we say more? This is going to be one of the wildest stocks in history. It will probably end ugly but will be a hell of a ride.

Phunware (PHUN): is mobile software that exhibits gamelike mechanics and behavior so brands can contextually engage customers and drive digital transformation. PHUN is closely associated with DWAC, so the stocks tend to move together. Many people believe PHUN will provide software for President Trump's Truth Social platform, though to our knowledge this is unconfirmed.

Remark Holdings (MARK): owns and operates a portfolio of digital assets including an investment in Sharecare, a leader in the online healthcare space.

DatChat (DATS): is focused on blockchain, cybersecurity, and social media, and is best known for the makes the privacy-focused messaging app DatChat.

Affirm Holdings (AFRM): operates a platform for digital and mobile-first commerce in the United States and Canada. The company's platform includes point-of-sale payment solution for consumers, merchant commerce solutions, and a consumer-focused app. Works with over 29,000 merchants, and recently made a big splash by signing up Target (TGT).

Camber Energy (CEI): Camber Energy recently took the title of #1 meme stock from our good old pal AMC. CEI has interests the onshore Gulf Coast region, containing enhancement and development prospects to facilitate organic growth. But for now, meme stock traders love it because it goes up like crazy. This ain't ExxonMobile, that's for sure. so be careful out there.

Farmmi (FAMI): Farmmi describes itself as a company that processes and sells agricultural products in China and abroad; it grows and markets shiitake and wood ear mushrooms and other edible fungi products, including bamboo fungi, chestnut mushroom, trumpet royale, hen of the woods, lawyer's wig, and lion's mane mushroom. FAMI is a crazy penny stock that trades insane volumes.

Greenidge Generation Holdings (GREE): Describes itself as is a leading provider of customer and tech support solutions and security software with a global network of home-based experts. Formerly traded under Support.com (SPRT).

Skillz (SKLZ): a mobile game platform that allows people to compete. Hosts tournaments for mobile gamers worldwide, and distributes prizes to them.

Robinhood (HOOD): A brokerage platform that aims to remove many barriers to entry. Revenue primarily comes from market makers and frequency trading firms that pay for order flow from retail traders. This is a very controversial name in our community.

BlackBerry (BB): The company in recent years has pivoted to rebrand itself from its iconic phones in the late 1990s and early 2000s. The company is best known for the Blackberry Bold launched in 2009. Currently focus is on cybersecurity, automotive, as well as various other software business to business software, but also continues to sell its consumer products.

Clean Energy (CLNE): Provides renewable natural gas as transportation fuel for vehicle fleets. Primary product is RNG fuel which uses organic decaying waste that produces methane (a harmful greenhouse gas) which is then turned into the cleanest fuel on the market.

Palantir (PLTR) Develops software to help distributed systems infrastructure, as well as big data processing, to make the user experience as friendly as possible. Engineers work directly with clients to build the best and most secure platform.

SoFi Technologies (SOFI): Provides financial services such as brokerage accounts to fit each customer’s needs. Evaluates investing and spending habits to provide the best advice depending for each user and also serves as a way to save and transfer money.

ContextLogic (WISH): An ecommerce company that adapts based on each individual user’s interaction and shopping patterns on the platform. By increasing interaction with the platform users are recommended products that better fit their needs and trends.

Bed Bath and Beyond (BBBY):  American retail and ecommerce chain that specializes in bedding, bath, kitchen, and other household products. In recent years, the company has pivoted to be able to compete online by offering expedited shipping as well as 20% off to its members on all items.

United Micro Electronics (UMC): A semiconductor company that focuses on logic and specialty technologies to help all electronics sectors. Primary branches of growth are currently in the 5G, IoT and auto industries at the moment.

Cleveland Cliffs (CLF): An iron mining company supplies the North American Steel industry. The company is self-sufficient since it extracts and manufactures steel products itself without the need of a third party.

Krispy Kreme (DNUT): A specialty Donut retail chain that provides a unique experience with customers watching the assembly line and being given branded paper hats. Also sells branded merchandise on its website and pastry items to grocery and retail stores.

Corsair Gaming (CRSR): The company sells gaming hardware products such as power supply units, microphones and numerous other accessories. Corsair also has a big presence in streaming products and software.

Newegg (NEGG): an online retailer of items including computer hardware and consumer electronics. This is a big shopping center for gaming and computer enthusiasts.

Tesla (TSLA): Primarily focuses on all electric and autonomous vehicles. Focusing on growing production globally and has begun to introduce other green energy products such as charging stations and at home solar solutions.

Nvidia (NVDA): A modern semiconductor company that also provides computer graphics, GPUS, AI, gaming software, and various other products. The company has had to pivot recently to try and help the global shortage of computer chips.

AMD (AMD): A global leader in semiconductors that focuses on innovation and security. Partners with innovative software and application companies that strategically align with the company’s technologies and markets.

What Goes Into a Meme Stock?

A stock first becomes a meme stock when a large social media group on Reddit, Twitter, Facebook, or TikTok focuses on a stock flying below the radar.

The most notable group is referred to as WallStreetBets and this active group was responsible for the rise of AMC and Gamestop.

Typically, the stock has a massive increase trading volume without any real change in news or fundamentals. This increase in trading volume comes from the social media groups pooling a bunch of investors together all at once.

#memestocks are typically heavily shorted by hedge funds. The most famous example of this was the GameStop situation, where the stock was aggressively shorted by major hedge funds, most notably Melvin Capital, which eventually blew up. 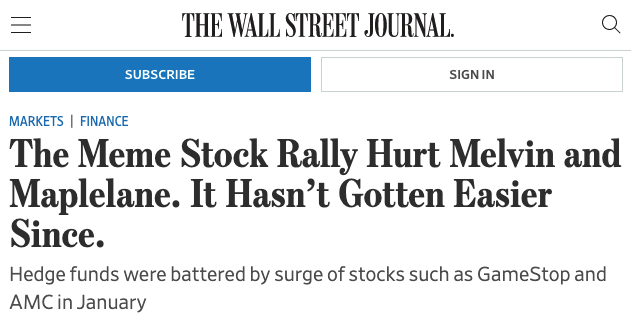 The hurt put on Melvin Capital was considered a major victory by the #wallstreetbets and #memestock world.

A short squeeze happens when traders aggressively buy a stock to drive the price up. The rising price can force shorts to lose money and cover their short positions, giving the stock even more upside momentum. 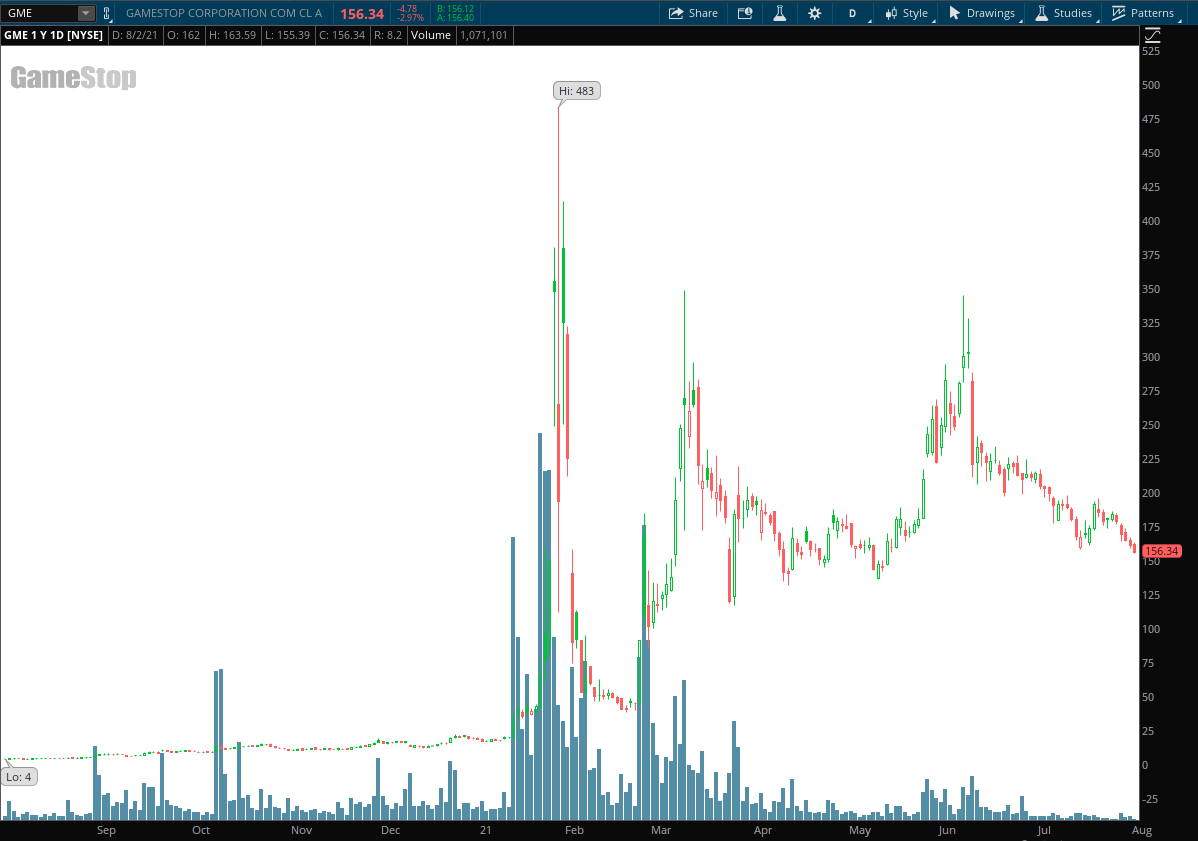 3) #memestocks Typically Have Some Cultural Value

These are major brands people know and love - or at least knew and loved in the past.

Hedge funds want these stocks to go down.

And the #wallstreetbets #memestocks crowd want to stand in the way and make the stocks fly higher - defying Wall Street.

Make no mistake: #memestocks are VERY volatile and you have to be careful trading them.

The most popular #memestocks fit all the above criteria. AMC and GameStop are the most obvious ones.

But not all do.

For example, gaming hardware company Corsair (CRSR) has a big following in the #wallstreetbets community, is heavily shorted, and can be volatile. But it's not quite a household name to the masses.

New names like Camber Energy (CEI) and Farmmi (FAMI) are similar - wildly popular as stocks, but not as brands.