3 Meme Stock ETFs You Need to Know (and avoid?)

Are there meme stock ETS?

Yes, there are meme stock ETFs. But they have a big problem - they don't have a lot of meme stocks in them.

These alleged meme stock ETFs look more like plain old vanilla tech ETF's. So maybe you should just stick to actual meme stocks if that's what you're interested in.

Let's start with a quick comparison table of the 3 most well-known "alleged" meme stock ETFs.

The meme stock world exploded in January thanks to the WallStreetBets subreddit. Soon after, ETF manager VanEck launched a fund called the VanEck Vectors Social Sentiment ETF, which trades under the ticker BUZZ.

Accoording to VanEck, Buzz is "intended to track the performance of the 75 large cap U.S. stocks which exhibit the highest degree of positive investor sentiment and bullish perception based on content aggregated from online sources including social media, news articles, blog posts and other alternative datasets."

The funny thing is... the index upon which BUZZ is based was launched in 2015. So it's really nothing new.

And judging by BUZZ' holdings, it appears to be nothing but a regular old tech ETF.

Here are its top 10 names by weight:

Let's look at its performance vs. QQQ, the Nasdaq 100 ETF on a chart. They basically look the same but BUZZ (on top) is more volatile. 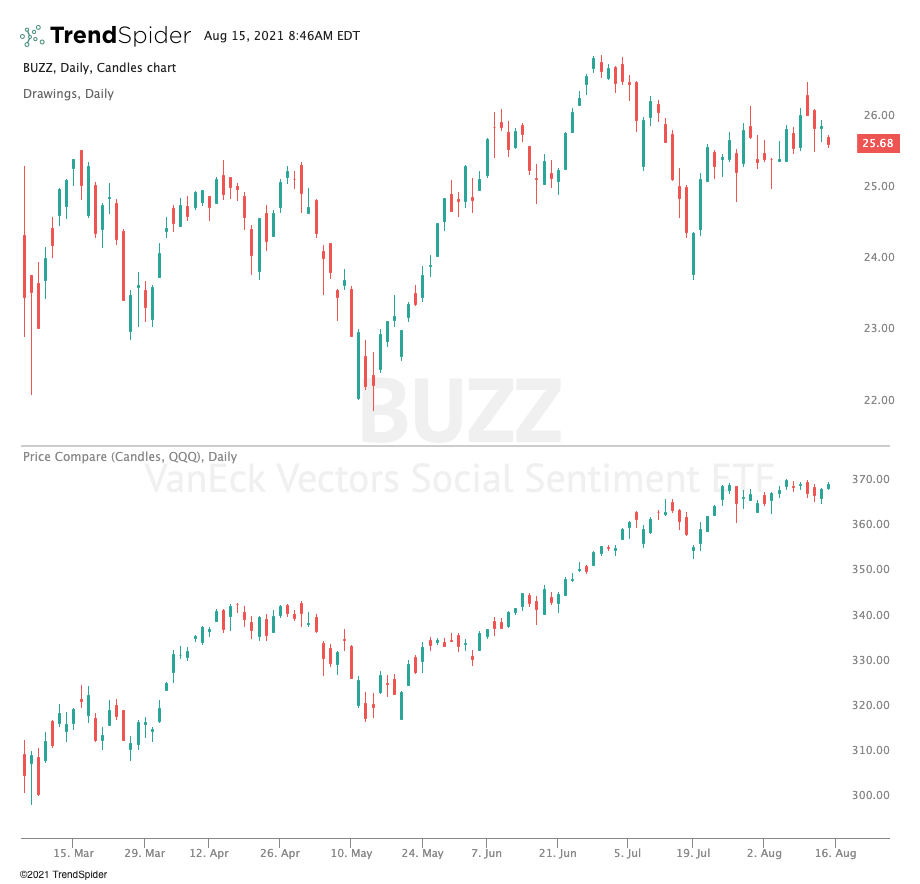 Plus, let's look at fees.

That's a small amount of money, but compounded over time, can add up to be quite a bit.

BUZZ is not the only ETF that claims to invest in a variety of trends and meme stocks.

We also have a recent one called the FOMO ETF, which trades under the ticker FOMO.

FOMO claims to shift its holdings to allow investors to ride the meme stock wave.

However, similar to BUZZ, FOMO has many non-meme stocks in the top 10, in this US Steel (X) and Bank of America (BAC).

AMC is only the 21st largest holding in the ETF and accounts for only 1.6% of the total fund! And it doesn't own GameStop at all!

So far, FOMO has not been a success, gathering only $5.8 million in assets.  It also trades very low volume and has a relatively high 0.9% expense ratio.

We have a third meme stock ETF - The SoFi Social 50 ETF, which is run by SoFi Technologies (SOFI), which itself is an actual meme stock!

The SoFi Social 50 ETF trades under the ticker SFYF. Here are its top 10 holdings:

AAPL, TSLA, AMZN, and MSFT account for 23% of the fund's holdings, so over the long run, the fund's performance will resemble QQQ's.

You can see that here in the following chart which shows SFYF on top, QQQ on bottom: 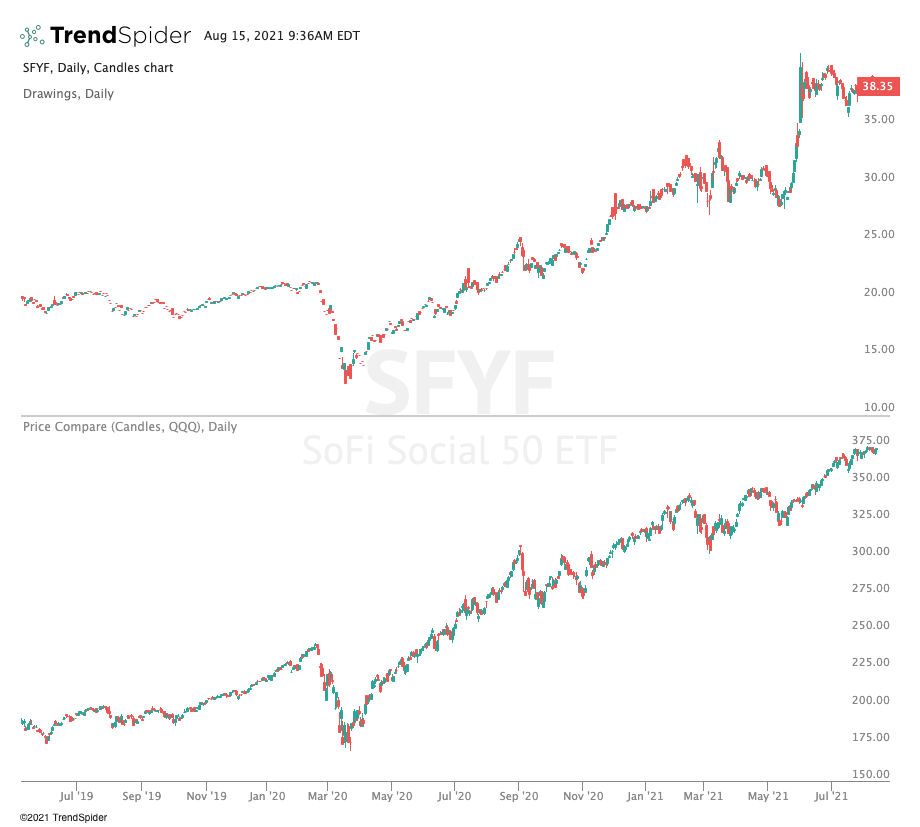 SFYF got a MASSIVE boost in May when select meme stocks like AMC went parabolic.

SFYF also has a low expensive ratio, though it hasn't attracted much in the way of assets or volume.

So Should You Buy Meme Stock ETFs?

If you want meme stock performance, these ETFs will not do the trick. They are more like generalized tech ETFs than meme stock etfs.

To play in the meme stock universe, you have to get your hands dirty and play with actual meme stocks. Only you can decide if that's worth the risk.