DWAC: How We Nailed the Trump Meme Stock in our FREE Newsletter

Have you joined our 100% free meme stock newsletter yet?

Because on Thursday October 21, 2021 at 8:59 a.m. ET, we called out Digital World Acquisition (DWAC), the SPAC that merged with Trump Media & Technology Group. TMTG's centerpiece property will be a social media platform called TRUTH Social.

This is when $DWAC was trading around $12.

We proved we are the #1 meme stock newsletter in the galaxy. Here's exactly what we said:

Here's the exact timestamp out of our email account:

We challenge you to show us any PAID newsletter that got you this call.

Heck, we actually officially added $DWAC to our official meme stock list before anyone knew what was happening. 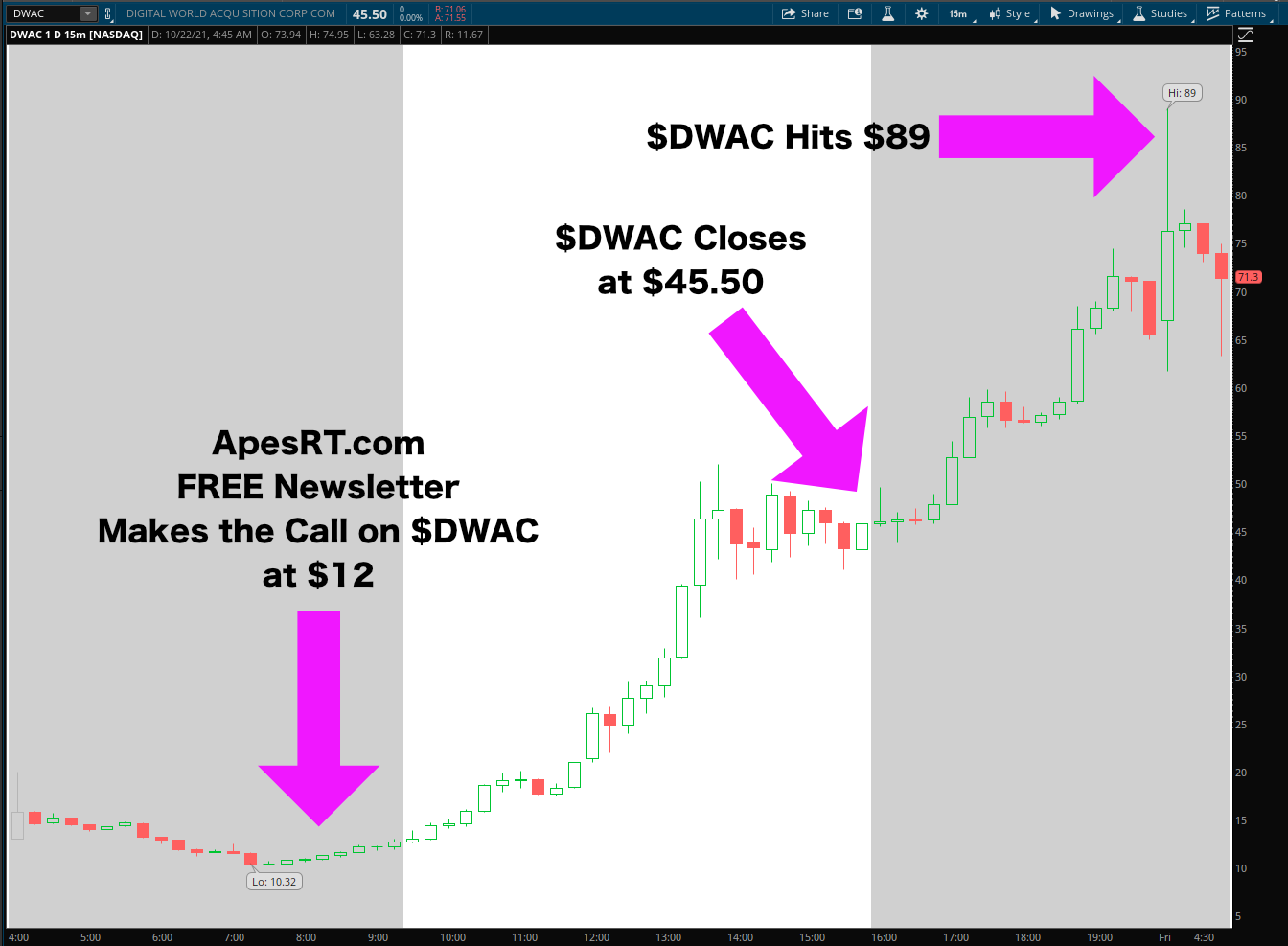 So our FREE newsletter ID'd the stock at $12.

And it hit $89 in the premarket the next day.

Again, we challenge you to find a single premium newsletter in the world that called out this stock.

And you got it for FREE if you were on our list.

So Why Did DWAC Go Up So Much?

This is a far simpler story than anyone realizes, if you understand the criteria for a meme stock.

DWAC had all the makings of a monster:

Now let's talk about that last point for a minute.

As a result, the Trump fan base simply takes the opposite view of whatever the mainstream says.

And what did we see yesterday?

The corporate press and boring corporate comedians crapping all over the idea of Trump running a successful social media company. 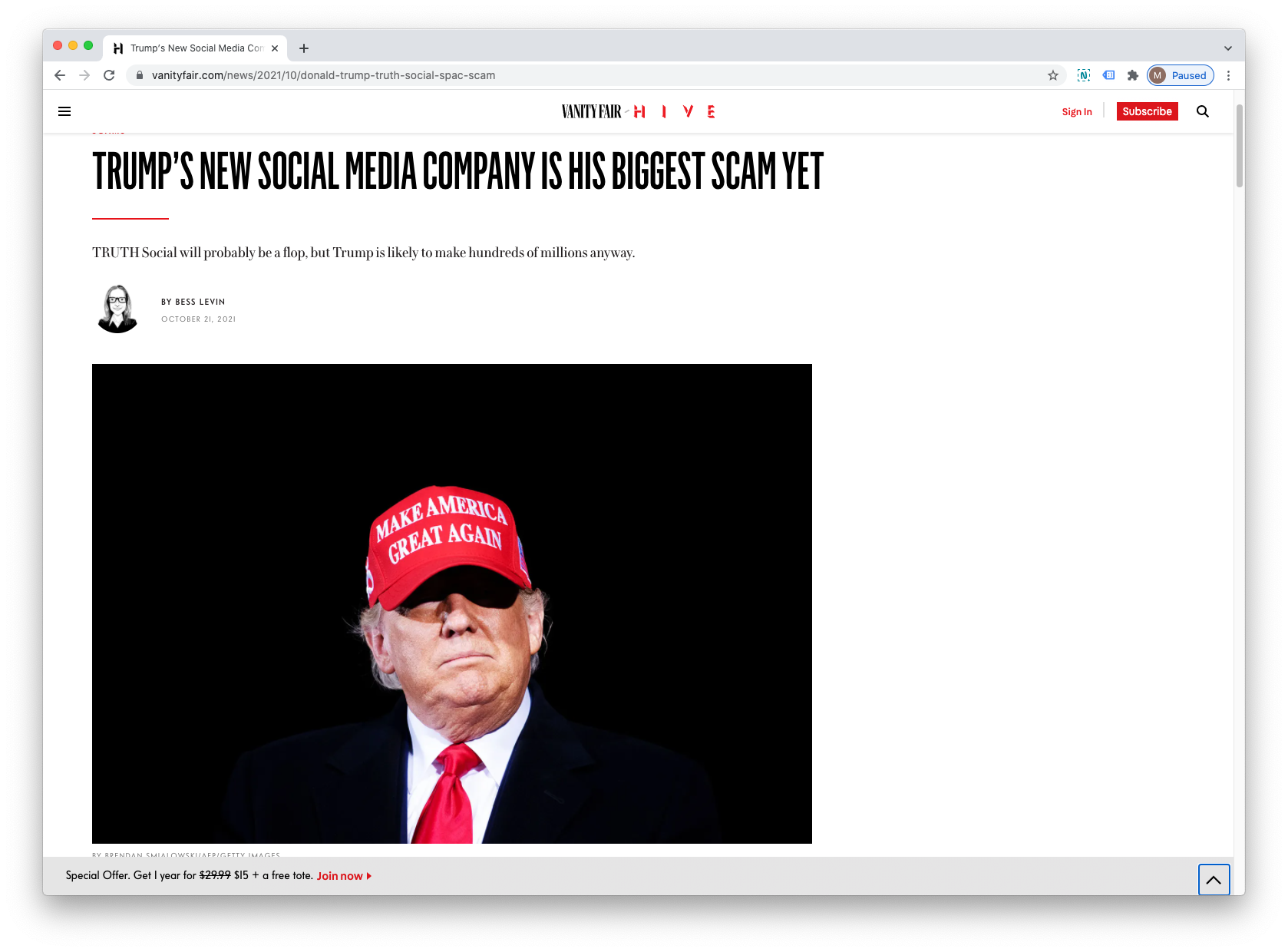 The Trump base reflexively takes the opposite view of ANYTHING the media says.

Kevin Paffrath of Meet Kevin might have said it best:

I screwed up. $DWAC is the perfect protest stock against censorship & big media, w/ a slogan of “Let’s go Brandon.” This could be bigger than GameStop $GME.

Look, the fundaments today are bad. However, the hope & potential is huge. Traders didn’t sell into close. That’s bullish

The result: an explosive stock rising 357% in one day.

It was entirely predictable.

Because when you mix the words 'Trump' and 'Spac' in the age of meme stocks, how can the thing NOT go up?

That's why so many of us were buying premarket - hours before CNBC and Bloomberg and Fox even knew what was going on.

Meme stock traders got in BEFORE the Trump train which accelerated the upside.

We're not here to tell you what to think about Trump or anything else.

You can love him, or you can hate him. That's your right.

We're here to focus on stocks that can make us money.

So we'll give you our brutally honest opinion.

If anyone can create a new social media powerhouse, it's Donald Trump.

Why? Because if he can get a platform running, he'll have 25 million people signing up on the first day.

The mainstream media will give him all the free advertising he'll ever need - just like in the 2016 election.

FACT: CNN and the NY Times did more for Trump than Fox News.

There are other questions can he get a platform up and running?

Plus, he has to be able to keep his apps attached to big tech in one way or another. For example, you can reserve the TRUTH Social app on the Apple App Store... but Apple can pull it at any time.

And what about third-party tech services like cloud computing and payment processing? Can Trump get all those in order?

Does That Matter For $DWAC?

NO! Of course not.

$DWAC is nothing but an emotional rollercoaster of fear and greed. The fundamentals do not matter.

Make no mistake: the risks are ENORMOUS. This thing will crash and burn like every meme stock eventually does.

You can make big money and you can lose big money.

Do not listen to the pumpers and think $DWAC can only go up. This thing is like lit dynamite. Be careful.

But as meme stock traders, we understand that.

We understand we take big risks to attain big rewards.

We won big on this one.

And hopefully, there will be many more. Want in on the next idea? Join our newsletter below: